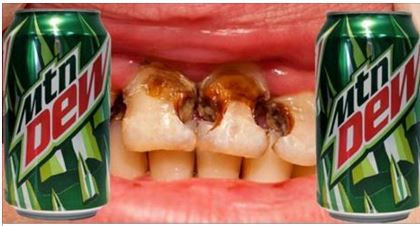 This Is As Bad As It Gets

Mountain Dew is one of the most popular soft drinks around, it may be tasty but did you know the damage it does to you? You only have to look at the picture to see the damage it can do to you teeth. Here are the some of the serious issues that are a result of the drink, which you might not be aware of.

According to children’s dentist, Dr. Terri Winn, Mountain Dew is one of the most acidic soft drinks, not too far away from Coke and Pepsi.

Normally, since it produces it, Pepsi must reassure you that the consumption of Mountain Dew is completely safe, and that its ingredients are not harmful to your health.

However, it is always better to see and decide for yourself. Here, we give you the list of Mountain Dew’singredients:

Mountain Dew has a very high sugar content that adds on to its acidity and toxicity. Here’s a chart to show you how much sugar is in this beverage. It Harms Your Reproductive System

There have been claims on numerous occasions that the consumption ofMountain Dew can shrink a man’s reproductive organs. Although there is not much direct evidence to back up these claims, there still may be some correlation between the two.

Namely, your hormones can become imbalanced by the Mountain Dewcontainers. In other words, BPA is found in the linings of the bottles ofMountain Dew, with the aim of preventing the container from being destroyed by the acidity of the drink.

Additionally, research has shown that this compound can affect fertility rates and can lead to numerous health problems including:

In 2009, Ronald Ball discovered something jelly-like in his Mountain Dewdrink that he had purchased from a vending machine at his work. When he poured out the contents of the can, the remnants of a tiny mouse came out along with the jelly-like substance.

After Ball contacted Pepsi and told them about the situation, they sent a representative to retrieve the mouse remnants from Ball. According to reports, Pepsi later responded by stating that the mouse would have long dissolved before Ball would have had the chance to open the can ofMountain Dew.

It is difficult to tell which part of this story is more disturbing. Is it the fact that a man claims that he had found a mouse in his can of Mountain Dew, or the fact that Pepsi has publicly claimed that Mountain Dew has the ingredients necessary to fully dissolve an entire mouse? Either way, it would probably be a good idea to just avoid Mountain Dew altogether so you don’t have to find out. Yikes!

If you are looking for an alternative…

Rev3 Energy uses low-glycemic sugars for energy. It’s the long-lasting energy that will power you through the day. You’ll feel the long-lasting effects of the proprietary blend of teas, L-carnitine, ginseng, and cacao —without the crash. It provides all the power of an energy drink yet contains no artificial flavours, colours, sweeteners or preservatives.

For decades, the energy drinks available to you were laden with artificial flavours, sweeteners, and chemicals. At long last something better, a superior healthy alternative.